Here in Alicante I found a completely different conundrum. The spelling of the station name was different on each of the two platforms! What made it somewhat more bizarre was that the system is operated with trams on the surface at this part of the route and so it is clearer to see the differences in spelling. The two platforms are opposite each other and the two name boards are also opposite each other!

There is perhaps a tussle going on between the choice of language but from the point of view of making a map of the system it would be somewhat ludicrous to have two names for one station. Or would it?

I can think of a number of examples where each of the stations or stops have at least two names; Athens, Bangkok, Beijing, Brussels, Dublin, Helsinki, Hong Kong, New Delhi, and Shanghai, with Singapore the odd one out with 3 different names per station.

In each of these cases it is the addition of another language. In the case of Athens, New Delhi, Singapore and the majority of Chinese cities that have metro systems, it is where the operator is being helpful to their foreign tourists.

That helpfulness doesn’t always extend to some networks. Belgrade, Moscow, St Petersburg, and Sofia are not in the habit of making the wayfinding of their systems as easy as it could be for non-native speakers.

There also appears to be some disagreement between the makers of the nameboards and the makers of the neighbourhood maps that are usefully provided at each of the tram stops. Here are a couple I noted whilst doing the field research.

These are actual photos taken at the time and are some of the 48,000 photos taken over the years of field research. 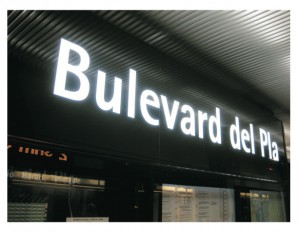 Station nameboard. Note the difference in spelling in the locality map above. 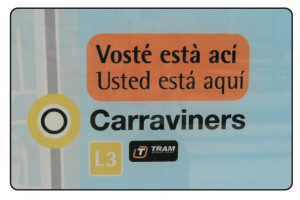 Locality map displayed at the same station shown below 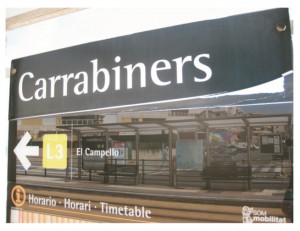 Does it really matter that the spellings of the names of the station and the locality map differ? Not in the big scheme of things but consistency is good when it comes to providing passengers with information as it alleviates anxiety.