Beneath the waves to Asia…

My first map research visit to Istanbul took me far and wide around the transport network and here I focus on my impressions, findings and feelings about this most fascinating city.

In the days prior to 1973 the only way to cross from Europe to Asia, in Istanbul, was by ferry. Then in 1973 the first of two bridges linking the two continents opened, meaning travel by road was a possibility, the second bridge opened in 1988. However, in 2013 a third way to travel was born, beneath the busy waters of the Bosphorus on the Marmaray link (Marmaray being a combination of the word of the nearby Sea of Marmara and the Turkish word for rail, ray) 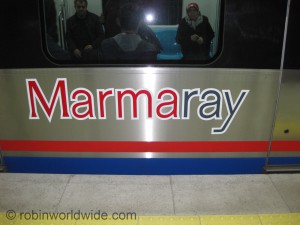 Side of a carriage on the Marmaray line.

The Marmaray tunnel is the centrepiece of a section of railway reconstruction from Halkali (in Europe) to Gebze (Asia), a 14km section in the middle of a 77km long building project. The construction work started in 2004 and in 2013 the section from Kazlicesme (Europe) to Ayrilik Cesmesi (Asia) opened. 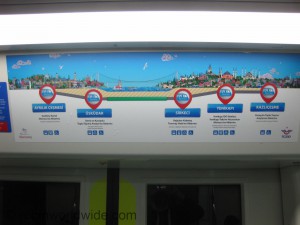 The remainder of the project involves replacing and refurbishing the existing overground lines and stations and is expected to take many more years before finally complete. This will then integrate into the wider rail network of Turkey. 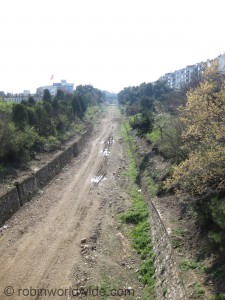 The line of the railway west of Kazlicesme, before the new track is laid.

The station on the European side is Istanbul Sirkeci, once the easternmost terminus for the famed Orient Express service, it is now a station of three parts, the original 19th century station building, the modern station building alongside and a set of steps taking you deep underground to the newest section, which is now the last station in Europe before travelling under the Bosphorus.

The old station sleeps as a proud reminder of the past, the original entrance now unused, traditional Islamic arched windows and a fine circular stained glass window above the intricate glass panels set into wide wooden doors.

Ornate stonework, inlaid tiles and plasterwork frame the hardwood doors that lead from the platform into the original building, now housing a restaurant and the railway museum. 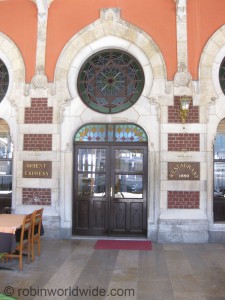 Doors to the Orient Express restaurant from the platform. 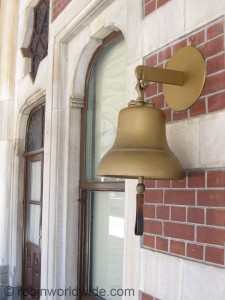 Brass bell on the station wall.

Cast iron pillars hold the canopy above the platform to provide shelter from all weathers. 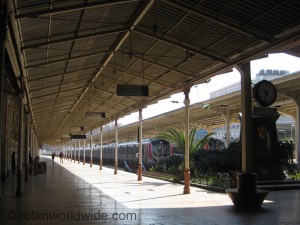 Alongside the platforms is a covered set of stairs, into which you descend to the modern station deep below its predecessors on the surface. 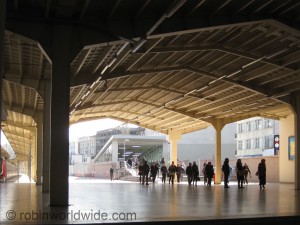 There are other portals to this “underground” world dotted in the streets to the south of Istanbul Sirkeci, a series of gaping mouths and flights of stairs leading you to 21st century travel across the Bosphorous. 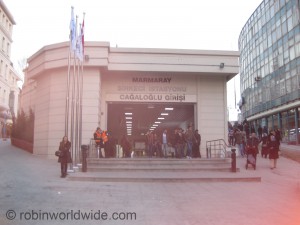 Another entrance to the south of the original station. 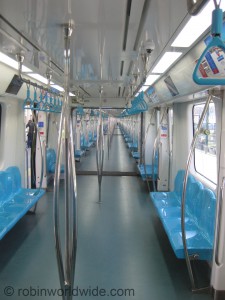 Inside one of the modern Marmaray carriages.

Trains leave every 10 minutes, 18 hours every day, on the 2 mile (3.5 kilometre) journey, travelling in an earthquake proof tunnel, 60 metres below the boats and ships that cross the waters above. The line currently only has five stations, three in Europe and two in Asia.

At the Asian terminus, Ayrilik Cesmesi, you can join the M4 metro that runs from Kadikoy to Kartal and has a station adjoining and take the one stop hop to its end and then take a trip on the vintage T3 tram which runs in a loop through the old heart of the old town. Or maybe take the ferry, from Kadikoy, back across the water to Europe. 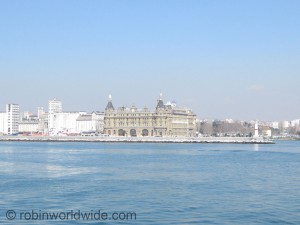 From Kadikoy quayside the very impressive Haydarpasa rail terminus stands on the waters edge, this is the “other half” to Istanbul Sirkeci. Haydarpasa was the location you would have rejoined the train having crossed the Bosphorus by ferry in the days before the bridges and tunnel to continue your journey eastward.

Alas the building is now not used as a station but houses the offices of the Turkish State Railways. Whether it will again perform the role of a railway terminus is debateable, as it has now been effectively by-passed by the new Marmaray line. There are rumours that the building will become a luxury hotel, from where you can see all the activity on the narrow strip of water, which snakes between the two continents.