Probably. It can be done by foot and does not require a passport.

Where is it? Between Austria (Tyrol state) and Germany (Bavaria) at the summit of the Wetterstein mountains, the Zugspitze.

What’s there? Germany’s highest restaurant where you can have their highest beer!

Here’s a whole lot more detail about it: http://zugspitze.de/en/winter/mountain

I like it so much I’ve been there twice. First time in February 2013 and this, the latest time, was with my good friend and colleague Andrew Bata from New York in October 2015. We had been attending the UITP conference in Munich and decided that we’d extend our stay a couple of extra days so to enjoy the delights of Zugspitze. We were really lucky with the day of choice to visit – absolutely cloudless which afforded us some fabulous views.

I’d recommend the route going up the mountain via cable car from Eibsee and then take the cogwheel train back down to the DB mainline station at Garmisch-Partenkirchen which has direct trains to Munich Hauptbahnhof in around an hour and 20 minutes. Cable car journey looking up from the Eibsee station. This is being completely re-built and a new improved system will be available by December 2017. Details here.

And right now you can see what is probably the world’s highest crane! 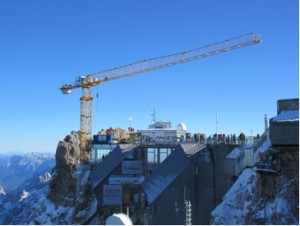 Perched right on the edge of a shear 2900+ metre drop. Gotta have nerves of steel to be this crane operator. A view towards Garmisch-Partenkirchen 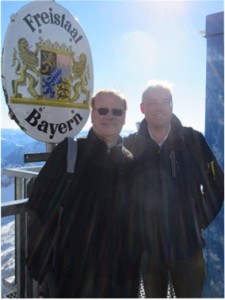 One minute we’re in Germany… 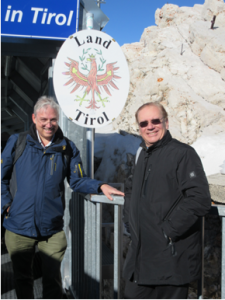 The next we’re in Austria! 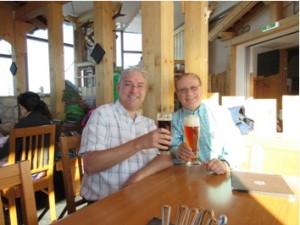 Cheers from the highest restaurant in Germany A view from the cogwheel train that runs between Garmisch-Partenkirchen and the mountain top station Zugspitzplatt.