What does a 2–year old living on the outer edges of the London underground in the mid 60’s know about travel? Probably not too much and yet here is where a spark lit a flame. Uxbridge is the terminus station on the Metropolitan and Piccadilly lines and the town I lived in from birth until around the age of four.

For my second year Christmas present I was given a wooden toy train by my father which, apparently, kept me amused for many hours. Whilst out shopping with my mother and baby brother I started a succession, of what became my disappearing acts, of wandering off in the department store. I was found happily going up and down the escalators much to my amusement but to the utter distress of my mother!

Months later, after those early attempts at exploration, I fixated on going to the above ground Underground station at Uxbridge where I could enjoy the sight of real trains coming and going.

I could see the trains arrive with their white headlights getting closer and closer as the train approached the buffer stop, and I watched them turn to red as the driver changed them over in preparation for departure and I do seem to recall, in distant memory, my awe and wonderment as the doors slammed shut after the last person had jumped on and seeing the train glide along the platform and the tail lights get smaller and smaller until they disappeared up and around the corner and out of sight. 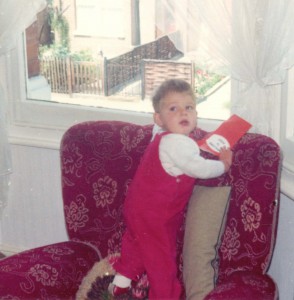 And even to this day, 50 years later, the very same question, “where do they go?” keeps my mind fresh and inquisitive and keeps me doing what I do best.

So when you’re in a city street and you see a bus or a tram do you ask yourself that question? Perhaps other questions come to mind; what’s down that road, where does it lead to, what’s along the way, what’s there to see, what’s there to buy and the different kinds of food there maybe to try and interesting people who might I meet.

At other times when you have a specific place to go you would ask yourself is that bus, tram, train etc heading in the direction I want to go?

At school I used to sit by the window and I certainly remember, whenever there was blue sky, seeing the contrails criss-crossing high above and thinking, where are they going and where have they come from?

At the age of six I flew to Sweden on my own to visit my grandmother. Travel has definitely been my ‘thing’ and an occupation in the travel industry would surely be on the cards after I left school? 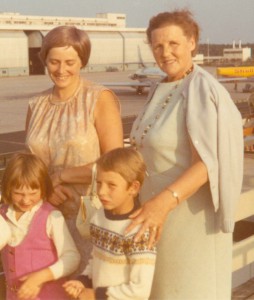 Age 6 having just arrived at Stockholm Arlanda airport with my grandmother behind me. She couldn’t speak a word of English so I had to learn Swedish

Indeed it was, with the obsession to drive trains. In the early 1980’s when I had completed Sixth Form (now known as years 12 & 13) there was a ban on recruitment to the Footplate. 60 ever-hopeful letters and several interviews after months of patience was finally rewarded with a Clerical Grade job in the Ticket Office at Wokingham. Years later I did get the opportunity to drive trains.

But what has all this got to do with the work I do now? Well I have been interested in maps specifically, and passenger information generally, and those interests began to answer the original questions of that 2-year old at Uxbridge underground station. At school I would doodle on my school exercise books drawing the Beck London Underground map from memory. I used to collect schematic maps published by British Rail and London Transport.

As a result of that unhelpful first contact I decided to investigate the bus company routes in greater detail. There was no map available at the time and all they had was a set of timetables for each route.

The first all-system transport map I designed was the Alder Valley bus network. All undertaken using the family living room table, a set square and metre rule, along with the edges of that table and the paper itself as substitutes for a parallel motion to draw horizontal, vertical and 45º lines, and combined with my local knowledge of the area and that set of timetables.

I took the design to the head of marketing at the bus company and whilst initially impressed, the rather jaded view was, and I quote, “you have to understand that we have to appeal to the lowest common denominator and although I agree it is a good design it will be a complete waste of money for us to publish it because our customers won’t use it”.

Luckily times have changed, in the most part since then, and more and more companies are waking up to realise that good, honest and accurate transport mapping and clear information using good design principles are paramount to their success in attracting new and retaining existing customers.

The second map I designed – Paris Metro – turned out to be the first one to be published, initially by Filofax and then the Paris Travel Service in late 1990, both of whom had been using the official map, or a version of it, that I thought looked rather like a plate of coloured spaghetti with the names of the stations just casually thrown around like a kind of garnish.

Disparaging perhaps, but the context is that I’d grown up with, and been excited by, the clear and uncluttered Henry Beck design of the London Underground and the various similar styled schematic maps of the Southern Region of British Rail during the 1960’s to 1980’s.

In January 1991, along with a good friend, I travelled on a whistle-stop tour of 17 European cities in 11 days from Madrid to Brussels. We found the availability of transport maps and other information to be quite lacking. There were either no maps or other information or, what did exist, was of very poor quality.

It was after the first sales successes with Filofax and the Paris Travel Service and that whistle-stop research that I realised there could be quite an interesting and fun business opportunity and so in March 1991 the partnership of Transportation Cartographic Service, more commonly shortened to just TCS, was officially born, and its first set of customers – the AA in May 1991, followed by American Express Guides also in 1991, Thomas Cook Holidays, Thomas Cook Foreign Exchange and Thomas Cook Publishing in 1993, Cadogan Guides, and then in 1997 National Geographic Society, and not to forget the many other esteemed clients over the intervening and following years.

All these companies wanted to replace their existing (or in some cases non-existing) maps with my designs to give to their customers. Repeat orders and demands for more of the same style maps for different cities in different publications let me know that I was on the right track.

To date, having designed 127 different transport maps (as well as numerous street maps and other passenger information products) and personally having field researched 97 of those, I could never have imagined, as that 2-year old standing at the barriers at Uxbridge underground station watching the trains coming and going, that I’d get to see, and map, so many of  the world’s transport networks, in such a way.

In 2004, with the prolonged illness of my business partner Patricia Johnson (23rd April 1946–17th September 2005) since 1991, the Limited company Communicarta was formed to take up the mantle and continue on with a worldwide reach with maps in over 1000 different publications, products and mobile applications, with more than 13 million copies produced and downloaded the journey still continues…